Celebrated every Sunday at 11:30AM at the Mission Church of Holy Saviour Parish: Our Lady of Mount Carmel, 454 Fairfield Road, Plymouth Meeting, PA 19462 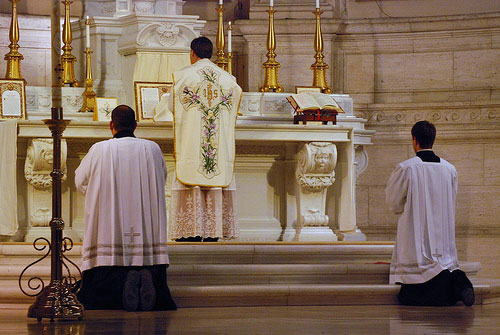 What do we mean by the “Traditional Latin Mass?”

One of the oldest and most constant of the traditions of the Church is found in Her form of worship. We believe that the highest form of worship which we can offer to God is the Holy Sacrifice of the Mass, which makes present through the validly ordained priest, the same Sacrifice offered by Our Lord once upon the Cross. By the command of Our Lord to His Apostles, the first priests and bishops, “Do This In Remembrance of Me,” we believe that Our Lord Jesus Christ conferred the power to make present over and over again upon our Altars, not a new sacrifice, but that same sacrifice which He offered once on the Cross. In this way, the graces and fruits of Calvary are made present for the faithful in their own time and place.

At the Church’s beginning, the Liturgy, or ceremony, of the Mass consisted of readings from Scripture, the offering to God of the elements of bread and wine to be changed in to the Body and Blood of Christ, the Eucharistic Prayer, during which this change takes place through the power and words of the priest, the reception of Christ’s Body under the form of bread and the blessing of the priest upon the assembled Christians. This would sometimes be accompanied by song, generally the Psalms of David, after the usage of the Synagogue.

Until the year 313, the practice of the Christian religion was forbidden by the State. Therefore, Christian worship took place secretly, often in the underground catacombs, where the Sacrifice of the Mass was offered over the tombs of the martyrs, who had given their lives for their faith in Christ and His Church. In the year 313, the Roman Emperor Constantine permitted the Christian religion to be practiced publicly and there began the construction of beautiful Church buildings for the worship of God. Along with this freedom, came a more elaborate celebration of the Church’s Liturgy, always with the same basic elements.

The influence of the Roman Empire also was seen in the language in which the Mass was offered. Latin was the language of the Empire and a great unifying force among the various peoples within that Empire. Since, by God’s mysterious design, Saint Peter, the first Pope, preached the Gospel and was martyred in Rome, the influence of the language of the Empire naturally was seen in the Liturgy of the Church. Latin also became a unifying factor among the various people to whom the Faith was brought, by the Apostles and their successors. These are the Bishops and missionaries who followed the command of Our Lord to “go and preach the gospel to all nations.” When it ceased to be a spoken language, Latin retained the advantage of having a meaning to its words, which would not change, since the language was no longer a living and spoken one. This was very helpful to the transmission of pure doctrine and clear teaching of the Faith.

While certain customs grew up around the celebration of the Mass, the basic elements remained the same. Some of these elements acquired a fixed and unchanging form in the very earliest centuries of the Church. Small variations existed in various parts of the world and, since they posed no threat to the Faith, they were retained without any central rules being issued by Rome. With the advent of Protestantism in the sixteenth century, which denied some of the basic teachings concerning the Sacrifice of the Mass, the Holy See, for the first time, legislated the exact form of the Mass. In 1570, Pope Saint Pius V codified one form for the celebration of the Mass throughout the Catholic world. In doing this, he did not “create” a Mass, but codified a basic Liturgical form as celebrated throughout the world. Exceptions were made for those Rites and usages, which were in existence for more than two hundred years.

Speaking of this Liturgical Form of the Holy Mass, the great liturgist and scholar Father Adrian Fortescue wrote:

“So our Mass goes back, without essential changes, to the age when it first developed out of the oldest Liturgy of all. It is still redolent of that Liturgu of the days when Caesar ruled the world and thought he could stamp out the Faith of Christ, when our fathers met together before dawn and sang a hymn to Christ as to a God. The final result of our enquiry is that, in spite of unresolved problems, in spite of later changes, there is not in Christendom another Rite so venerable as ours” (“The Mass,” by Adrian Fortescue).

After the Second Vatican Council (1962-1965), the use of the vernacular in place of Latin was introduced into some parts of the Mass. Then, in late 1969, an entirely new Liturgy of the Mass was introduced, which was envisioned as being mainly celebrated in the vernacular language. Although the Traditional Latin Mass continued to exist in certain places, it was mostly replaced by the New Mass. With the passage of time, many realized that that there was the danger of losing a great treasure of the Church’s patrimony in allowing the Traditional Mass to fall into disuse. It was the product of many centuries of natural development, had inspired the treasury of Gregorian Chant and was celebrated and attended by saints and millions of the faithful down through the ages.

In 2007, with the Motu Proprio (meaning “on the Pope’s own initiative”) “Summorum Pontificum,” Pope Benedict XVI called for a wider celebration of the Traditional Latin Mass and placed it side by side with the Ordinary Form of the Mass, calling it the Extraordinary Form of celebration of the Holy Mass. To quote the document: “The last version of the Missale Romanum prior to the Council (Vatican II), which was published with the authority of Pope John XXIII in 1962 and used during the Council, will now be able to be used as a forma extraordinaria of the liturgical celebration.” The Pope also made clear that this liturgical form was never suppressed. He wrote further:

“There is no contradiction between the two editions of the Roman Missal. In the history of the liturgy there is growth and progress, but no rupture. What earlier generations held as sacred, remains sacred and great for us too, and cannot be all of a sudden entirely forbidden or even considered harmful. It behooves all of us to preserve the riches which have developed in the Church’s faith and prayer, and to give them their proper place.”

Holy Saviour Parish is one of several Parishes in the Archdiocese of Philadelphia designated as a center for the celebration of Mass in this Form every Sunday and we welcome all those who wish to attend. Here are two website links that will give you a great deal of further information on the Traditional Latin Mass and enable you to access resources for its study and celebration: